I’ve always had a deep love of pirates… and no it started way before Johnny Depp became one… (although that has made the love grown stronger..who can blame me!?!)

Oh and let us not forget Mr. Bloom who also made some of  us girls hoping to meet a pirate some day!
But I think my love of pirates really did start back as a teenager… when at this summer camp and it too had a deep affinity to pirates…(which is an inside joke).  One of the Mayors’ of a 9 & 10 year old Section of the camp made up a  song that was all about how everyone that worked at the camp were pirates.

It was a quite clever song with the the chorus and verses made up of ‘inside’ jokes of things that happened that summer that only staff would know about.  Thinking back about this makes me smile, but part of it is kind of silly…like you might only remember if you were a pirate working at that camp!  Even years later.. I still remember my ‘pirate’ days along the beaches of Lake Clearwater!
Alas there is something deep down inside of me that will always want to be a pirate!

Today is Officially “Talk like a Pirate Day”….  to mark that day… you get to see me in my full pirate gear…I am not one to be messed with..!! 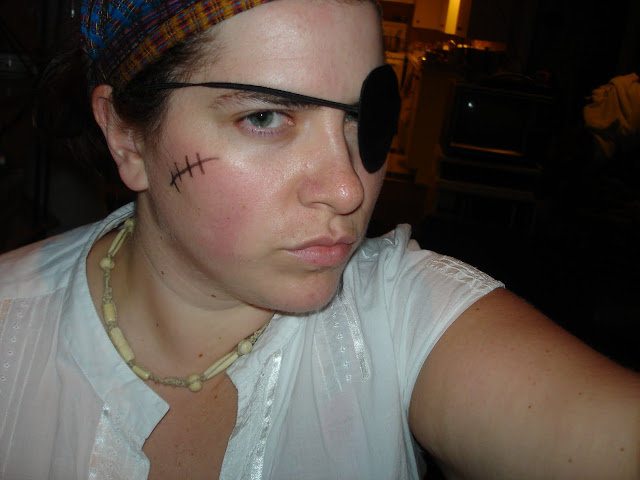 Aye – that’s right! So, Drink up, me hearties!
Arrrrrr. shiver me timders….I’m off to swab me’ decks…and fill up on some grub.. and look for some buried treasure!